How to Train Your Dragon: The Hidden World

Okay, so… apparently this movie is just coming out today (22/02/19) in the US, but it’s been around since January in other parts of the world. I myself just saw it today, in fact, I am fresh from the cinema and it felt like the perfect time to express my opinion 🙂 … I will keep it SPOILER FREE! 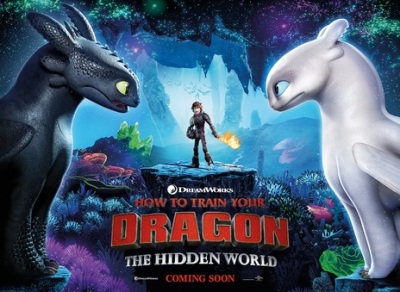 One thing you should keep in mind is that this – third instalment of the franchise is in fact considered to be the last one … I did not really know that when I walked into the cinema … but I am me and I don’t regret it, just thought others should be prepared mentally.

Right then, in regards to the movie itself:

I read a few reviews, both critics’ and audiences’ and here’s where that got me…

Compared to the first two movies of the franchise, the third one has both its merits and downfalls. Starting with a lack of humour comparatively and little relationship development/story. But all that really means is that creating a finale to a franchise is by far THE HARDEST MOVIE TO MAKE!

Yes, there was less humour (but I did laugh out loud on a couple occasions), yes, there was less relationship development between the human characters of the movie but there was a very strong focus on the relationship between the humans and the dragons! I would say it is almost impossible to hit all the departments when creating a movie and score 10/10… very few movies ever have (if they have). Therefore, I would say a movie always has an orientation, a focus in one direction more than another. For How to Train Your Dragon: the Hidden world this department is the special effects and animation!

I can say it is worth seeing just for that! I watched in awe at the colours, shapes, shadows, texture and depth of the picture. A friend of mine described it as ‘Gorgeous!’ and I agree.. fully!

The animators haven’t spared any resources be it time, money or sleep 😉

I want to see the movie again just to please my eyes and escape into the Hidden world! God, I wish it existed… I would move in tomorrow, no questions asked.

Anyway, one can tell the team struggled to figure out how to tell this story in a better way than many others have been told. I would never say they failed. It is indeed a heartfelt story and a heartfelt ending. I tried so hard not to cry considering the number of children around me, but I failed, and at that point, I wished I could let all the emotions out just because the scene deserved it. The bittersweet ending is a hit or miss when it comes to animations, but here it is right where it should be!

Sure, the villain sucks, but he is more a catalyst for the story development than a centre-figure like Drago was in the second movie.

I must also say just how strong, important and positive the message of the movie is!

As hard as it is to say this, I am glad that the creators decided to conclude the franchise. It is good to see they are learning from their mistakes (the likes of Shrek should have taught a lesson or two). I am going to miss these characters and their compelling stories, but our part in those stories should have a boundary … it is how we keep our love for them alive and burning!

And just because we are so close to the Oscars I must say … DONT FORGET THIS MOVIE until February 2020! It deserves to be nominated for Animated Feature Film !!!

An aspriring filmmaker with respect for the art of cinema as high as it can be. Don't hold it against me if my reviews are too chaotic, don't include many facts or are different than your own opinion. I am literally doing what I like most to see if it'll get me somewhere. Expectations at this point ... non-existent View all posts by Color Creative