How do you make a remake/sequel of a highly beloved movie? Mary Poppins Returns is the answer.

Let’s start with that – it is set as a sequel, yet it is definitely a remake of the original for the new generation of children. This is probably one of the few remakes I am glad they made because it has been 54 years since the original. Quite a few generations haven’t seen the 1964 Mary Poppins. And she is a character worth introducing to children (even though there are drawbacks I can spot as well, but hey, it’s an entertainment industry, not educational).

So, yes – it is very entertaining! Slightly shorter than the original yet I would say still quite long if you’re going to the cinema with children. They barely sit through an hour and a half, let along 2 hours. But I also agree that there is no other way to do it proper justice, considering that it is also a musical.

Either way though is it very pleasant to watch. It is bright, it is colourful, it is fun. Sequences and musical numbers are well-thought through, I mean they had Rob Marshall as a director. This guy has won and been nominated for many awards for his musicals (Chicago, Into the Woods). Good choice. 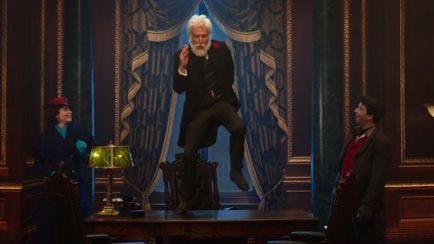 I liked the fact that practically all of the original songs and numbers have been both recreated and reinvented. That’s Disney for you. I think they cracked the code for making successful sequels (don’t make sequels; make sequels=remakes). It was probably also very nice for parents in the audience to notice all the references to the original movie. They brought Dick Van Dyke back to sing and dance again. That was something.

Overall, a nice movie, what can I say. There is a lot, and I mean a lot of music and dancing. That is pretty much the key thing about it. the good thing is that they managed to make them all different, entertaining and unique in their own way and style.

Costumes I want to mention are amazing. They received an Oscar nomination too 😊.

Personally, and this might as well be just me, but Emily Blunt was very entertaining to watch as Mary Poppins. I definitely felt a difference from Julie Andrews’ Mary, but that wasn’t bad in any way I think. Considering children nowadays are probably never going to meet the old Mary. I loved her Britishness, in fact, I loved the Britishness of the entire movie. I literally kept thinking to myself: ‘what’s the next cute British phrase that she’s going to say?’. That was probably a great part of the comedy on its own.

And overall, there’s only one thing that made me so very sad – NO ONE said ‘Goodbye’ to her! I was quite shocked really. I mean yes, the Banks’ family didn’t say ‘Goodbye’ to Mary in the original as well, but Bert did and he even said ‘Don’t stay away too long’. That made for such a bright and hopeful ending against the grey gloomy background of 1910 London. And here, she just left… that was painful. Wonder what children thought of that.

When all is said and done, consider that its simply put – another well-told story for the family. Great scenes, vivid colours, a very talented cast and one unforgettable nanny!